I am the youngest of 5 siblings. This junior level status came with a certain amount of drawbacks. A discounted opinion, hand-me-downs from a bygone era, and a confirmed seat at the dinner table only when someone was absent, were just a few off the top of my head.  I will, however, freely admit that for the most part, my positioning had more

advantages than headwinds.  Those that came before me paved the way and set precedents for what was to be expected from a McCarty child. By the time I came along, my parents had seen it all and were either surprised by nothing or too tired to debate my nonsense. As such, if my childhood was the equivalent of a sailing ship in the Caribbean, I picture my brother Justin’s as the Icebreaker through the Arctic.

Justin is the oldest, and we are 12 years apart.  Being the only two boys in the group, he was firmly established as the guy I wanted to be.  He played guitar, didn’t try to make me play with Barbies like my sisters, had cool albums with bands named Black Sabbath, Led Zepplin, and obscure singer-
songwriters like Harry Chapin.  He was a gymnast and took me to see Rocky without our parents’ permission.  At 10 years old, it didn’t get much cooler than that in my opinion.

When we were younger, he paved the way by breaking in Mom and Dad as parents. I wasn’t around to verify, but rumor has it they weren’t as tolerant of his shenanigans as they were mine.  My response, of course, is it was all about the subtleties in the execution.

Regardless, Justin still sets an example as one of the most generous and

helpful people I know.  Music tastes may change, I was eventually able to drive myself to see Rocky, but there are some characteristics I will never stop admiring or equal.

Happy belated Birthday, Big Brother.  Keep being you and thanks for the lifetime of Tailwinds. 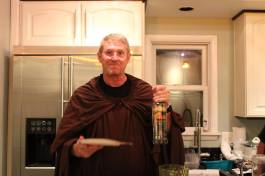