“Dear Mom,  It’s me, Mrs. John William McCarty.  Doesn’t that sound wonderful?  It does to me.” 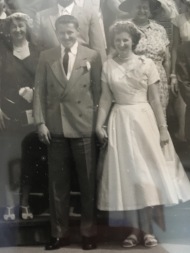 So began a letter from my mother to her mother two days after she became “Mrs. John McCarty”.  That was day #2 of a marriage that would last until my father passed away 21,455 days later. She was a love-struck bride thanking he

r parents profusely for the “perfect wedding reception” (I’d like to state for reference that the reception was in the backyard
of my grandparent’s Connecticut farm.  Lively to the point my Dad had to sneak a small keg of beer behind the barn, out of sight from my temperance preaching great-grandmother).    When
she wrote that letter, she had a lifetime of experiences in front of her.  She was obviously very excited about recent events and the journey ahead.  By the time it concludes with detailed directions to their new home in a trailer park, it tells the story of a wide-eyed woman as uncertain as the rest of us when we reach a point in our lives when we feel like we should be grown up.

My mother passed away three weeks ago.  The logical Jack keeps reminding me that she was 88 years old, and lived a life she loved.  She saw her kids and grandkids grow to become happy and successful.  She even played with great grandkids.  That ain’t bad.  As soon as I begin believing this propaganda, “Emotional Jack” stomps on the logic and argues back; “it sucks, and you know it.”

Just before she passed my siblings and I found a note she had written that listed a few things that were important to her and wanted to be kept in the family.  Suddenly there were five kids in a house where we were all raised allowed to explore places we were never allowed when growing up.  The things we found were amazing.

Then there was The Dress.  On the list of things my mother wanted to remain in the family was her wedding dress. Thanks to the wonders of a cedar chest, it was in perfect condition. This marked the first time any of us had seen it in person.  I was showed this bit of McCarty history to my daughter Julia a few days later.  Strangely, to me anyway, it was close to her size. Soon I was sitting in the living room talking to my sister when the dress

I had seen thousands of times in static pictures came to life. As the dress moved down the stairs, it began to tell it’s story.  In the smile on Julia’s face, I could see Betty Leiper.
She was a giddy, young, vibrant bride elated to have married the man of her dreams and excited to take on whatever life had in store. She was young once.  They all were. The items on her list were more than keepsakes.  They are part of our story.

While the emotional side of Jack is absolutely correct in that this whole experience sucks.  There is nothing I can do about it except realize this is part of my story.  They went through it, and now it’s my turn.  As my portion of the story continues, I will draw strength from those that help shape me and embrace the cast of characters and events that make my chapter so interesting.  I have been lucky beyond words to have incredible parents in my life for almost fifty years.  I will miss them, but I know a part of them resides in my kids and me every day as our story continues….

For those of you who appreciate creativity or maybe performance art, this post is exactly 1,000 words….  BOOM!

4 thoughts on “The Dress Was Worth A Thousand Words”